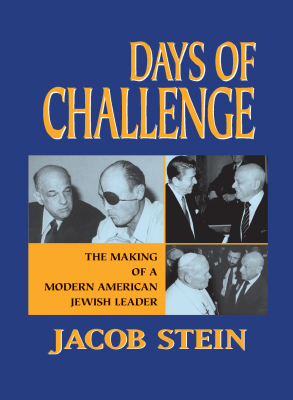 Jacob Stein’s upbringing gave him profound reverence for Jewish tradition and instilled a desire to reach out to his fellow Jews. This led him to become active with Temple Israel, the Conservative synagogue he attended with his wife and children in Great Neck, New York. Stein rose quickly to become Temple President.

In 1969, as a maverick candidate for President of United Synagogue, Conservative Jewry’s main body, Stein won a surprise victory. He immediately launched a series of reforms designed to reinvigorate its stagnant leadership.

Even though he was a newcomer to the Conference of Presidents of Major American Jewish Organizations, Stein was asked to serve as Acting Chairman. He assumed the role at a time when American-Israeli relations were tense. Stein participated in meetings with President Richard Nixon and Israeli Prime Minister Golda Meir to negotiate the terms of American aid to Israel in its conflicts with Arab states.

In subsequent years, Stein was twice elected in his own right as Chairman of the Presidents Conference. As Chairman, he suffered bitter criticism when he defended the Nixon Administration’s decision to maintain relations with the Soviet government while attempting to free oppressed Soviet Jewry. Convinced that this balanced approach would garner results, Stein stood by it, weathering the storm of personal attacks.

Stein became ever more embroiled in the challenges and controversies of Jewish affairs when he joined the Reagan White House staff as an advisor. His calming influence made him successful in the delicate role of liaison to the Jewish public during battles over the sale of AWACS military aircrafts to Saudi Arabia, when the American government was accused of threatening Israeli interests.

Following six weeks in Geneva as a member of the United States delegation to the 1982 United Nations Human Rights Commission, Stein returned to America to continue his political involvement. In 1986 he visited Israel with Vice President George H.W. Bush as a member of the “Gang of Eight,” a group of Jewish supporters who encouraged presidential candidate Bush to reach out to Jewish voters as well as the Christian right.

Over the next two years of campaigning, Stein and Bush kept up an exchange in which Stein offered the Vice President insight on gaining Jewish America’s support. Their friendship continued throughout Bush’s presidency, and even when they disagreed the two men retained a strong sense of mutual respect and camaraderie.

Despite his great success in business and his deep commitment to family, Jacob Stein has devoted untold time and energy to the American Jewish community. His memoirs reveal a life fully and richly lived in service to his people and his country.

To order through our website, press the “order now” button to proceed to our secure payment center. For faster service on charge orders, call us toll free at 1-800-953-9929.