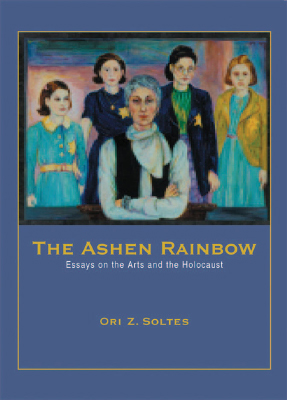 Ori Z. Soltes
The Ashen Rainbow by Ori Z. Soltes ISBN 978-0935437-37-9 • $23.95 The Ashen Rainbow considers various aspects of the arts as they relate to the Holocaust. It is based, in part, on the author’s experience in teaching the course The Theological Implications of the Holocaust for many years at Georgetown University–which has focused in part on writers who wrestle with questions of God and Man—-presence, absence, nature, existence as such—provoked by the extermination of so many innocents with so little opposition from the outside world. The juxtaposition of the terms “arts” and “Holocaust” is intended to draw the reader’s attention to a paradox: that the Nazis introduced a new level of intensity to the human capacity for destruction; and yet their acts have yielded an unprecedented volume of creative effort, a rainbow tinged with ashes in all directions—writing, music, theater, visual arts, film—during the decades the gates of Auschwitz were open to our own time. The arts are an extraordinary fulcrum upon which history, theology, psychology and economics may be seen generally to balance. The Holocaust context offers a unique mirror in which to view the broader realm of human experience balancing on that fulcrum. These essays encompass the writing of Elie Wiesel, Primo Levi and Nelly Sachs; music created in Germany and in Teresienstadt Concentration Camp through much of the Holocaust period. The visual art created both in Teresienstadt and elsewhere in the Nazi Reich, by both children and adults—and the works of theater and film—including a full-length essay discussing Steven Spielberg’s epic “Schindler’s List.” These topics are framed by a prologue that considers the intertwine of politics and art in the matter of cultural plunder by the Nazis and an epilogue that offers a definitive summary of the work to recover such plunder that, after a hiatus of half a century, has emerged in the past decade—and with which effort the author has been intimately involved. Connected by the rubrics “arts” and “Holocaust,” the diverse essays that comprise The Ashen Rainbow were written at different times and places over a fifteen-year period. Each essay stands on its own and together they offer a comprehensive, multifaceted examination of an event that captures humanity in its brightest and darkest moments.